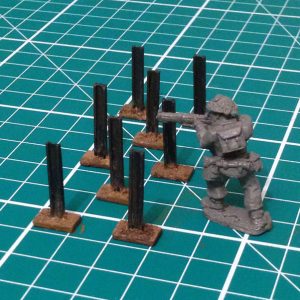 Pack of 8 (Unpainted – Figure not included)

I beams were used throughout Europe as Anti Tank Obstacles. These were used widely in the Maginot Line and British Home Guard Stop Lines.

In Britain post holes were built into roads and tracks, so that in the event of invasion the I beams could be dropped into place, stopping vehicles passing through Stop Lines.

I beams were often deployed in conjunction with Hairpins, Pimples and Barbed wire as an additional layer to slow down the enemy’s advance.

There are no reviews yet, would you like to submit yours?